The UK Oblivion Express dates are as follows – and London fans are in for a very special one off treat – Monday 2 November at The Jazz Cafe – for one night only, the original Oblivion Express guitarist Jim Mullen will be the Very Special Guest – this will be the first time Brian, Alex and Jim have performed live together since the early 70s!

Brian Auger’s Oblivion Express – one of the most groundbreaking jazz/funk/fusion groups of the 1970s has returned and is currently steaming across Europe!

From their first album in 1970 onwards, the Oblivion Express created a distinct sound that combines jazz, rock, soul and funk, built around Brian’s unmistakable Hammond Organ and electric piano sound – the group’s albums such as Closer To It, Second Wind and Reinforcements broke new ground, often entering the US Jazz, R&B & Rock charts simultaneously.

The latest incarnation of Brian Auger’s Oblivion Express is something very special as the original vocalist Alex Ligertwood is back in the band and so you can expect to hear fresh renditions of their classic hits; Happiness Is Just Around The Bend, Compared To What?, Freedom Jazz Dance and Whenever You’re Ready. 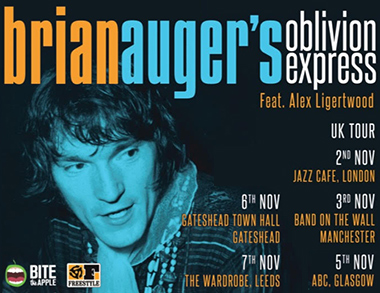