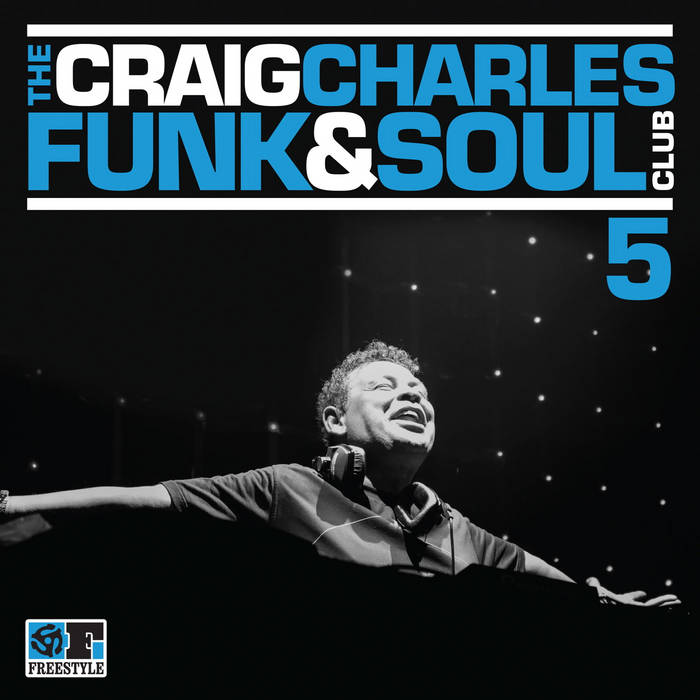 Ladies and gentleman, boys and girls – we have reached Volume 5 of my Funk & Soul Club compilations?! That was quick!
As this volume is something of a milestone – I have gone all out to bring together the baddest, most boom bap beats, the deepest funk, the sassiest soul and gorgeous grooves to put a shake in your shimmy and a wiggle in your walk. So let me take you through just some of the highlights in my latest trunk of funk.

The Andy Tolman Cartel can make musical time travel a reality – because when I’m listening to You What! I am transported back to the early 70’s and running down alleyways and chasing crooks because I’m in a TV cop show! Like a modern day Lalo Schiffrin or Quincy Jones – Andy Tolman writes and arranges this big band funk anthem and it a complete monster – wait for that final chord and you, like me will see “..to be continued..’ in your minds eye..double groovy.

Dear sweet, enchanting Charles Bradley – The screaming eagle of soul. A man who had it tougher than most. He spent decades as James Brown impersonator, a homeless person on the unforgiving streets of New York City. Throughout his 30’s & 40’s it looked like Charles wasn’t going to get to take a bite out of the Big Apple, and then along came Daptone Records and righted what would have been a far too serious wrong, and he got to release his debut album at the age of 62. . I have included his beautiful track Change For The World as my tribute to him.
If you have ever got down to the sounds of The Sugarman 3 as well as Sharon Jones & The Dap Kings, then you have already been moved by the sound of Adam Scone. His own group The Scone Cash Players are an old school Hammond organ soul-jazz outfit and here he is with Year of the Rooster Pt 1 – his own classic organ groove which features saxman Ian Hendrickson-Smith from The Roots – this is bountiful boogaloo beats for the 21st century and I love it.

Deep in the darkest corner of my sack full of soul, I have pulled out from the archives two old school zingers – the first is a track so rare that for many years its very existence was questioned by afro-funk specialists & record collecting crate diggers – but we have found it for you! Ginger Johnson & His African Messengers long lost Nawa which hasn’t been heard for well over 40 years!

Brian Auger is the greatest musical talent to ever emerge from Shepherds Bush, West London, and has been making music professionally since the early 1960’s – as an award winning jazz pianist, then a chart topping Hammond organ grinder! Here is his 1973 version of Marvin Gayes’ Inner City Blues from Brians’ most acclaimed album ‘Closer To It’ – a mixed up, musical potpourri so spectacularly well blended that upon it’s release it entered the Billboard Jazz, R&B and rock charts simultaneously – the very first time that had happened. Brian is legend – praise him!

We come right up to date with Lack Of Afros’ Back In Business! Teaming up again with rapping siblings Wax & Herbal T, this brilliantly banging and botty kicking tunage really proves that Adam & the boys are back in business – and then some Thats’ it – my gift to you – The Craig Charles Funk & Soul Club Volume 5 – and here’s to volume 6!