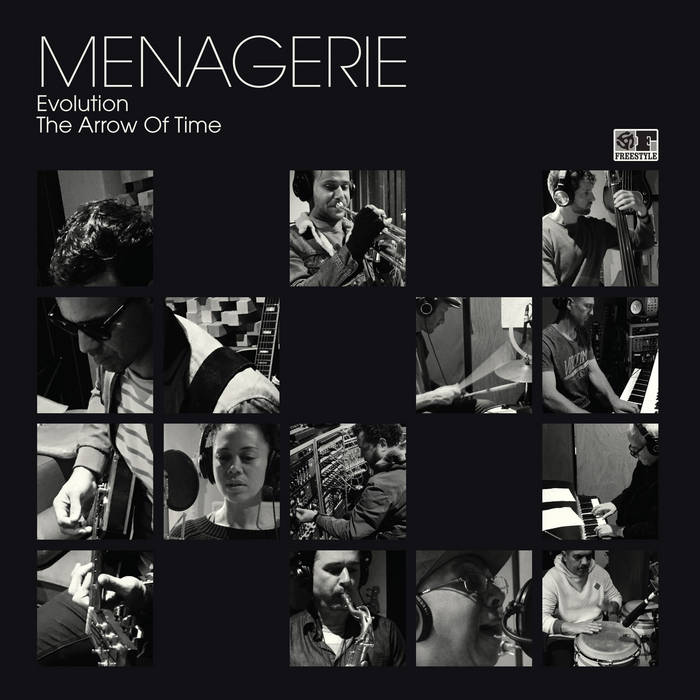 Lance Ferguson must surely qualify as a polymath, his varied musical skills & abilities reach across genres multiple projects. The Bamboos, Cookin’ On 3 Burners, Lanu, Black Feeling are just some of the projects he has brought to the publics’ ears, not forgetting of course his DJ-ing, radio presenting, songwriting and highly admired guitar playing.

The first incarnation of Lances’ Menagerie project ‘They Shall Inherit’ saw the light of day in 2012 (Tru Thoughts Recordings) and established the simple fact that jazz of the contemporary type could reach back to it’s essential roots and present itself, refreshed and vital for a contemporary audience. As Lance himself explains; ‘The Arrow Of Time’ draws its inspiration conceptually from the themes of spaceexploration, human evolution and the future of humankind. It’s all pretty big stuff to be underpinning an album of modal Jazz tunes – but the main message is one of hope, and I hope that message and feeling comes across in the music. The post-Coltrane generation of musicians going into the 1970’s and the sound of record labels like Strata East, Tribe and Black Jazz has been a massive influence on the music I write for Menagerie. To me that sound is timeless, exciting and just as vibrant as a musical format in 2017 – and the proof is that we’re hearing more and more young musicians embracing it. ‘The Freedom Principle’ by definition has no limits and no use-by date”/

2018 will see ‘The Arrow of Time’, the second installment of the venture released on Freestyle Records – the UK label rapidly establishing itself as a major force in today’s jazz and related musics, being the home also for Courtney Pine, Jessica Lauren, and keyboard legend Brian Auger.

As a scintillating taster for the full length album – this 2 track sampler provides an exciting glimpse of the full project – Evolution features Lances’ spoken word lyrics as voiced by Fallon Williams over a simply beautiful ensemble piece and The Arrow Of Time allows the collectives various enviously gifted soloists space to stretch out.