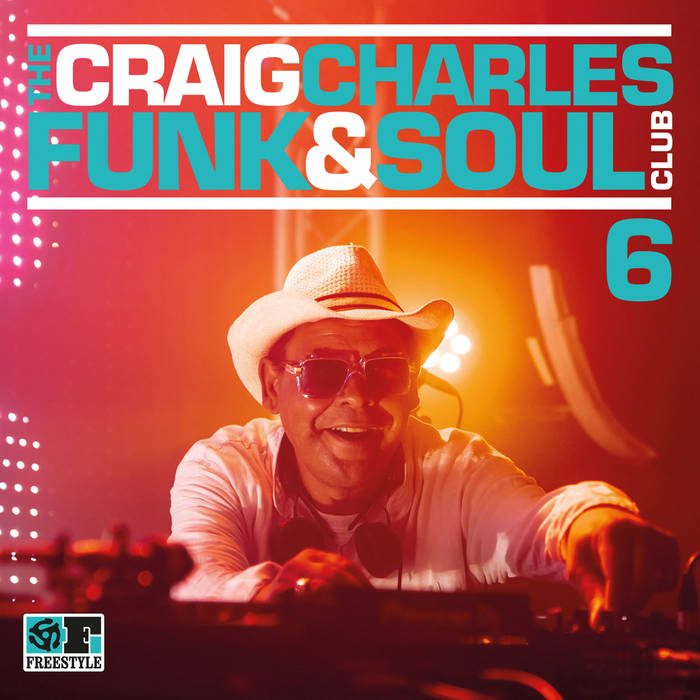 Since the very first edition of my Funk & Soul Club compilations was released back in 2012, I’ve continued my mission to spread the sound of mighty good grooves right around the world, not just via my radio shows on 6Music and BBC Radio 2, and my live DJ-ing to funk hungry punters in places as far apart as Aberdeen and Australia. The music continues to grow, expand and spread the message that no matter if it’s classic or brand spanking new, quality funky, soulful, jazzy, latin or bluesy sounds, people of every age, of every shade, from all over the planet cannot get enough of the real deal!

If I say so myself, this 6th volume of The Craig Charles Funk & Soul Club may just be the best yet, featuring seventeen cool contemporary cuts, and two absolute solid gold, classic rare groove monsters that have proven to be evergreen dance floor destroyers for 4 decades!
The first classic rare groove will be familiar as it’s been sampled many times since it’s release in 1978 – The Mighty Ryeders ‘Evil Vibrations, as well as being a dance floor perennial in it’s own right, also formed the basis of De La Soul’s ‘A Roller Skating Jam Named ‘Saturday’s – and it an honour to have it in this collection….what a tune!

The second rare groove classic selection comes from another British musical giant – keyboard hero Brian Auger and his Oblivion Express and features the elastic vocal chords of Alex Ligertwood. Foolish Girl is taken from Brian’s 1975 album ‘Reinforcements’ and to me it sounds like the Average White Band but with Jimmy Smith guesting on keyboards – it’s sunshine dappled, groovy jazz-funk with all it’s lovely bits hanging out.
Stir those 2 classics into a mix that includes Eddie Robert’s Matador! Soul Sounds, Smoove and Turrell feat Izo FitzRoy, Courtney Pine with special guest Omar, Gizelle Smith, The Get Up’s funkified version of Deep Purple’s Hush, Michelle David and The Gospel Sessions, Kizzy Crawford, mambo madness courtesy of Daptone Records Orquesta Akokan, The Lewis Express and The Delvon Lamarr Organ Trio and that nicely rounds off another Craig Charles Funk & Soul Club extravaganza, I hope it keeps you boogieing, and grooving until the next one.. the only thing for me to say now is.. of course.. Awooga!