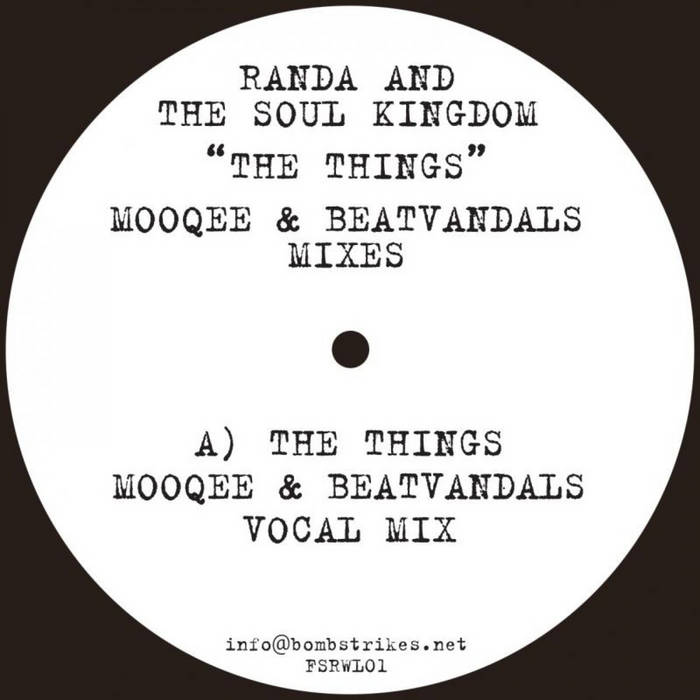 The Things (Mooqee & Beatvandals mixes)
Randa And The Soul Kingdom

Randa and The Soul Kingdom released ‘The Things’ swinging funky disco 12 (FSR092) on Freestyle Records early June 2011, a pretty straight ahead affair produced and guitar scratched by one of the busiest men in the music bizznizz: Lance Ferguson, the man responsible for Freestyle soul-jazz organ trio Cookin On 3 Burners, as well as The Bamboos & Lanu projects on Tru Thoughts Recordings.

Dance floors strained and heaved to that authentic disco sound Randa and Lance cooked up together..then Mooqee & Beatvandals (who need no introductions) dug the original and decided to take it somewhere else!. As head honchos of scene dominating label Bombstrikes they have countless no.1 sales positions across the main retailers. That record prestigiously includes knocking Snoop Dogg from no.1 spot on Beatport Hip Hop chart and staying there for over 100 days and counting. So they come correct with quite some pedigree to say the least.

For this booty style remix they have taken Randa’s outstanding vocal and completely reworked the track into an electro funk bomb. Toughening things up but losing non of the funk the mixes aim straight for the dancefloor but also have a radio cross over appeal as airtime from Kiss FM testifies.